The Weight of the Intangible

Free software represents a form of peer production which is based on reduction of transaction costs achieved by informal modes of organization and use of Internet infrastructure. This work grasps free software through a combination of approaches involving Actor-Network Theory, distributed cognition theory and multi-sited ethnography. The aim of this work is to capture knowledge dynamics in free software projects and to describe the role knowledge plays in this particular form of peer production. Based on data from participant observation, programming is described as a practice in which action is stabilized, assembled and delegated (through compiled programs) to a number of places (user computers). In this process, software tools serve to transform unstable flow of work into standardized units which are delegated to public places and are designed to be includable into different compositions. Even though licensing typical for free software intentionally and systematically suspends the rights traditionally associated with ownership (to access, modify and redistribute) by ascribing them to anyone, the activities affected by these rights are practiced only by small groups of participants who possess specific types of knowledge. As a result, it seems that in this environment there is a close relationship between ownership (on the level of practice) and knowledge. At first sight, this finding seems to validate the assumptions of enthusiastic anticipations related to the potential of digital technologies that knowledge has become the only determining factor of production. I, however, attempt to demonstrate that knowledge is still situated in extensive systems of production which are of material nature and that the requirements placed by these systems on participants limit their supposedly frictionless interaction. 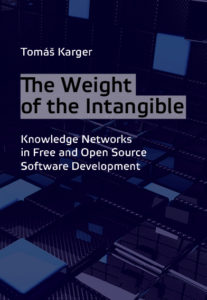